‘MACH adoption is the only way forward for the future of ecommerce’, warns customer experience expert

Evolution Space Launches the world’s first nanosatellite incubator, the successful completion of its inaugural mission near the boundary of space, Too Busy Chasing Stars. The $1.1M-backed space startup’s 720lb rocket reached an altitude of 188,444 ft while traveling at 3.95 times the speed of sound. The mission occurred at a private facility near Randsburg, CA, with Mojave Air and Spaceport nearby, on Saturday, November 13th, with T-0 taking place at its planned time of 6:49 AM PT. 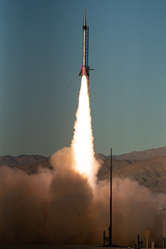 “This was a big day for Evolution Space and all technology innovators looking to rapidly iterate in space, and one we’ve been working toward for a while,” said Steve Heller, CEO and founder of Evolution Space. “Our vision is to democratize space access for nanosatellite developers, and this mission has laid the groundwork for doing so. Only seven private U.S. companies have reached space, and out of 2,000 others trying to join them, we’ve now flown closer to the space boundary used by the U.S. Military, the FAA, and NASA than any of them. In addition, we’ve done it with orders of magnitude less capital than any of the seven that have surpassed that boundary.”

Timely integration and no launch delays were an equally important step forward for the company. “Our team is thrilled with the system validation outcomes from this mission, but what I’m most proud of is the execution,” Heller said. “On time, under budget, none of the hiccups or delays or ‘space is hard’ moments that have become commonplace for fledgling space companies launching new hardware, including us in past missions.”

The mission set the stage for the company’s next foray, with the stated goal of passing the 100km Karman line. “As planned, this was an altitude-agnostic system test aimed at validating designs for the ultimate commercial vehicle in a representative flight environment,” Heller added. “Development and flight testing of our minimum viable product is now a small step, not a giant leap.”

Read Magazine is a digital publication which covers the latest industry specific news and updates across the globe, capturing market and micro markets trends which would impact your business in the near future.