Vertical Farming is what multistory buildings are in housing. They are stacked one top of another reaping multifold cropping at once!

Since they are modular, Vertical Farms can be sized to accommodate any structure. Also, as they produce 75 times more food per square foot than a traditional farm, they can usually feed more people than farming does. 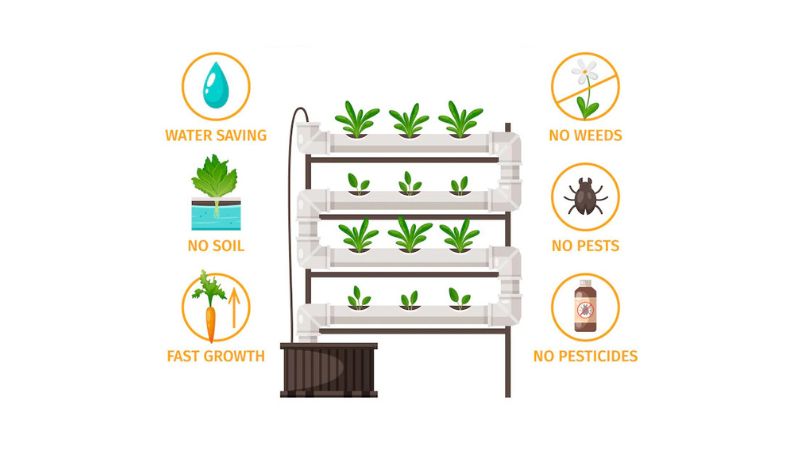 These farms also don’t use pesticides or fungicides, which is why the food is safer and healthier. Additionally, they have cut back on water use because indoor farms require 90% less water than outside farms, negating the need for a rainy or dry season.

This innovative idea makes use of controlled environment agriculture (CEA) technology and indoor farming practices. Producing food and medicine indoors is made possible by the artificial control of temperature, light, humidity, and gasses. Vertical farming resembles greenhouses in many respects, where artificial lighting and metal reflectors supplement natural sunlight. The primary goal of vertical farming is to boost crop production in a limited area.

In contrast to conventional fruit, which can travel thousands of miles by truck or plane, fresh food cultivated in vertical farms often travels only a few miles to reach grocery store shelves. As the world’s population is expected to reach over 9 billion people by 2050, vertical agriculture could contribute to boosting food production and expanding agricultural operations in addition to supplying fresh local vegetables.

Through situating operations closer to the point of consumption, this new frontier in farming enables farmers to increase output, consume fewer resources, and cut back on transportation.

Natural disasters like cyclones, floods, or extreme droughts can readily harm crops. Moving such plants indoors will greatly lessen negative effects because global warming has made that situation worse. Additionally, farmers will have a high degree of harvest predictability all year round. 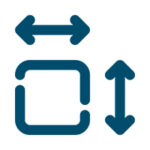 These farms can be planned and constructed in almost any environment, and you can cultivate crops there regardless of temperature extremes or unfavorable weather. The stacking growth mechanism of vertical farming is yet another impressive feature. This approach allows you to increase productivity on a relatively small plot of land. Approximately one acre of a vertical farm may sustainably grow the crops that you would have likely grown in 10 to 20 acres of land, depending on the type of crop you intend to grow. 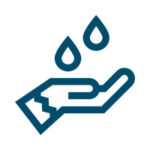 Crops grown in vertical farms have the potential to be grown without the use of pesticides if they are handled appropriately and using the right techniques. A controlled atmosphere is difficult for pests to infest, and fungal diseases can’t live since humidity levels are kept in check. Hydroponic vertical farms in particular utilize a lot less water than conventional farms. Since the water is recycled, very little water is lost. 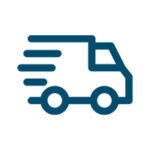 The cultivation of conventional farming takes a sizable amount of land, which must subsequently be transported to other cities and other regions. Farms might be close to or in a city. Shipping from farms to supermarkets is drastically cut down. This enables a city to grow organic products as well as seasonally appropriate crops that are normally shipped over large distances.

Less food waste is a benefit that comes as a result of lowering transportation expenses. Unfortunately, produce might get ruined or damaged before it gets to its destination and must be thrown away. In this farming, waste is greatly reduced, which ultimately lowers the price of produce in stores. 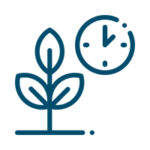 The fact that vertical farming is so dependable is one of its main advantages. This implies that if you choose vertical farming, you can be sure to have reliable crop output all year round.

The promise of having recurring crop output without any obstacles is another benefit of farming in a zone that is entirely protected and closely supervised. Since the effects of nature are absent in this situation, the concept of a seasonal crop is no longer relevant, and producers won’t suffer losses if they attempt to extend the harvesting season. 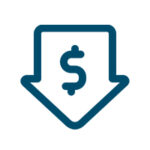 Fully automated indoor growing systems and greenhouses can produce successfully throughout the year without requiring a lot of manual labor. Naturally, you still need workers to register crops and make sure the machinery is in good working order, but you’ll need a lot less people to oversee the growing environment.

No farmer is exposed to the risks connected with utilizing heavy farming equipment thanks to indoor farming. Additionally, they are highly protected from a variety of illnesses including malaria, problems with hazardous chemicals, and the like. This method of farming is also a great approach to promote biodiversity because it doesn’t harm the nearby trees and animals in inland zones.

Crops can be cultivated in vertically stacked shelves in Despommier skyscrapers, where they can be mass produced in enclosed, controlled environments that are unaffected by the weather outside. These buildings can therefore be constructed everywhere, regardless of agronomic limitations. 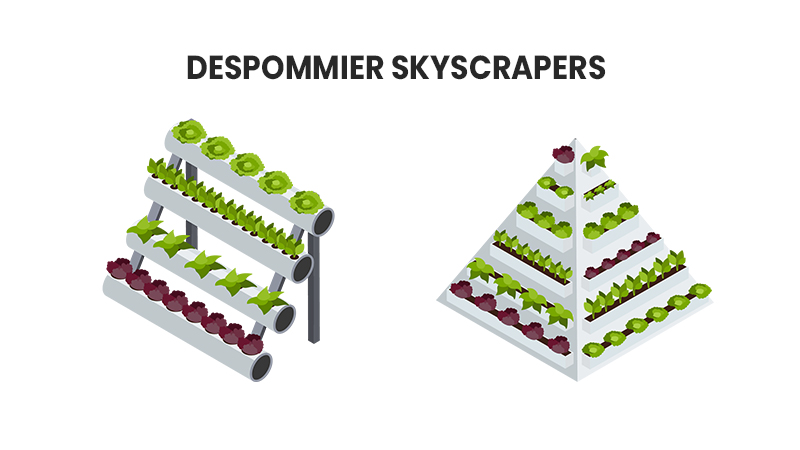 According to one school of thought, because vertical farms may be combined with renewable energy technologies, they use less energy and produce less pollution than some of those classic agricultural approaches. To meet the energy needs of these structures, solar panels, wind turbines, and hydroelectric power can be used alone or in combination. As local residents can labor in these vertical farms to make a living, vertical farming has the potential to generate a significant amount of employment possibilities.

Traditional agricultural practices and vertical farming ideas are combined in these skyscrapers. In these skyscrapers, crops are grown in natural sunlight, such as on the highest floors of an office building, as opposed to being entirely controlled and enclosed surroundings. 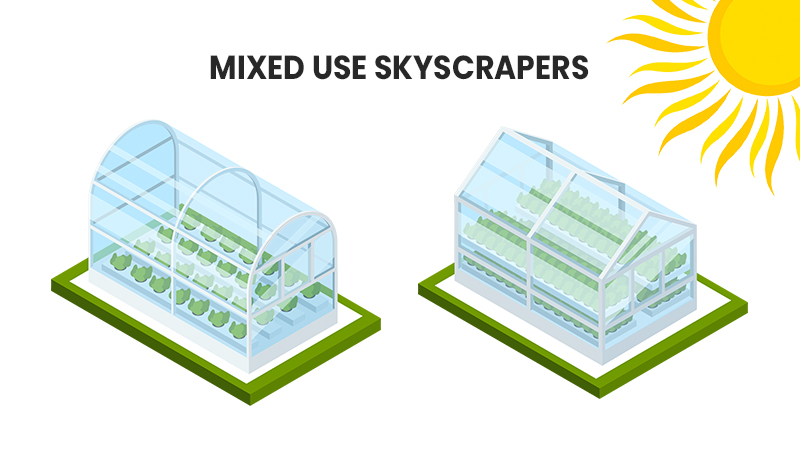 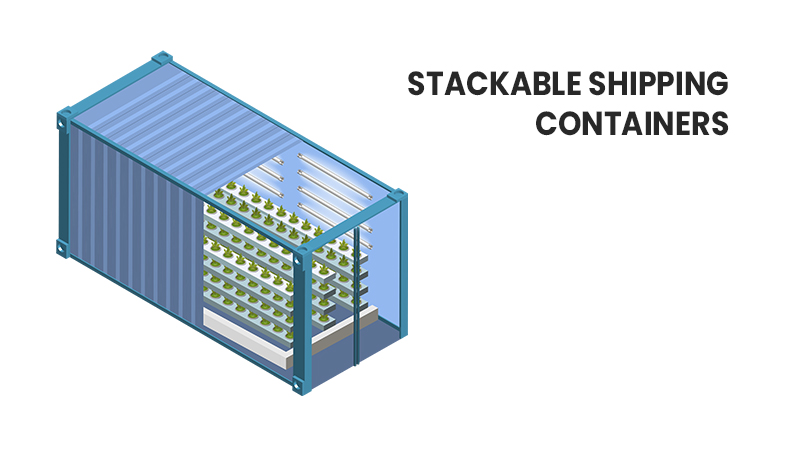 Vertical farming contains a number of growing procedures that set the actual cultivation apart from ordinary farming. Ingenious processes are facilitated by the integration of technology and exact botanical knowledge. There are three methods used in vertical farming which are 1) Hydroponics, 2) Aeroponics and 3) Aquaponics. The details of the processes are discussed in the below.

The most common growing method utilized in vertical farms is hydroponics. Plants are cultivated in nutrient solutions in this technique instead of in dirt. In order for the plant roots to grow, the nutrient solution in a grow tray must be deep enough for the roots to be submerged.

A reservoir beneath the grow tray, a water pump, and a timer are used to fill the grow tray with a nutrient solution a few times each day. The timer is set based on various factors, including the size of the plants, their water and food needs, their development cycles, and the ambient temperature. The grow plate is filled with the nutrient solution based on the timer’s preset duration till 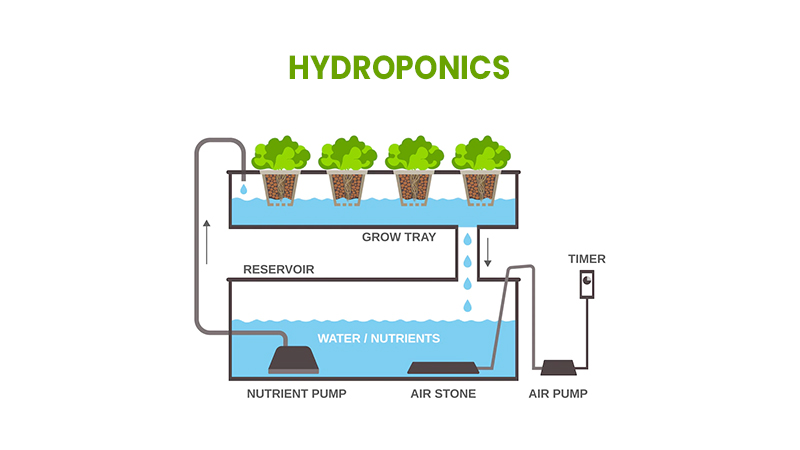 In an aeroponic system, soilless environment and air with very little water or mist are used to grow plants. The roots of the plants are suspended in the air in this system. Therefore, to ensure that the roots receive enough oxygen, the root zones are continuously misted with a nutritious solution using a tiny sprayer.

It has been discovered that plants develop more quickly in this system than in other types of hydroponic systems, making it the most effective vertical farming system. It also uses 90% less water than the most efficient hydroponic systems. Additionally, crop yields improve by 45 to 75% while fertilizer use is reduced by 60%. These systems have also been found to increase mineral and vitamin absorption, making the plants healthier and maybe more nutrient-dense.

In the same habitat, aquaculture and hydroponics are combined. Fish excrement from fish tanks can be utilized as a nutritional supplement to develop plants in grow trays since it contains a high concentration of nutrients. On the other side, the plants act as a natural filter for the water that the fish inhabit. The grow tray receives circulation of the ammonia-rich water from the fish tank. In the growth bed where the plants are developing, nitrifying bacteria convert ammonia first to nitrites, then to nitrates, and eventually to solids that are transformed to vermicompost, which the plants can use as bio fertilizer. 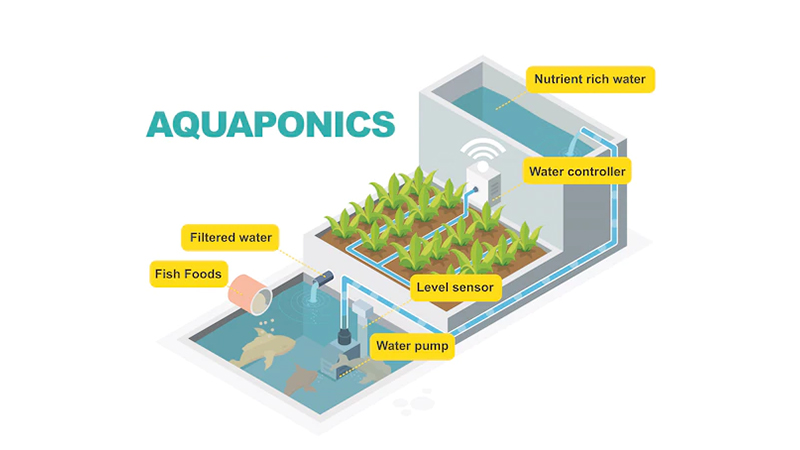 This water is recycled back into the fish tank once all the wastes have broken down and been consumed by the plants as nutrients. The main benefit of an aquaponics system is that, after it is set up, only pH and ammonia levels need to be checked weekly. During the first month, the system must be carefully monitored.

Despite numerous barriers to its expansion, many experts believe that vertical farming has a promising future. As early setup costs continue to impede expansion, the advantages exceed the disadvantages, which explains its expanding appeal. For instance, Dubai recently boasted one of the world’s most cutting-edge deserts.

It is claimed that ECO1, as the facility is known, is the largest vertical farm in the world. ECO1 is a partnership between Crop One Holdings and Emirates Flight Catering. The 30,000-square-meter farm will use 95% less water than crops grown in fields to produce more than 900 tonnes of leafy greens yearly, including spinach and arugula, which will be stored on shelves.

From July 2022, Emirates customers will be able to purchase the greens in stores, while UAE citizens will be able to consume the produce from ECO1. Since they are grown without the use of chemicals or pesticides, washing is not necessary.

In traditional farming practices, crops are susceptible to weather variations, natural disasters, and global warming. Natural resources are under tremendous pressure as a result of the ever-increasing population and the decreasing amount of arable land, fresh water, and crop yields. Although considering return on investment, vertical farming systems do not support all types of crop production, they do appear to be one of the most popular options for sustainable crop production.

Vertical farming may soon become a reality courtesy of advancements in information and communication technologies. To enable crops to thrive indoors in a controlled atmosphere, just combine technology from many fields. In order to make vertical farms cost-effective, IT and other technology businesses can contribute significantly by combining big data analytics, robots, the internet of things, and agri domain simulation/modeling tools.

Read Magazine is a digital publication that covers the latest industry-specific news and updates across the globe to capture market and micro markets trends that have the potential to impact businesses in the near future.